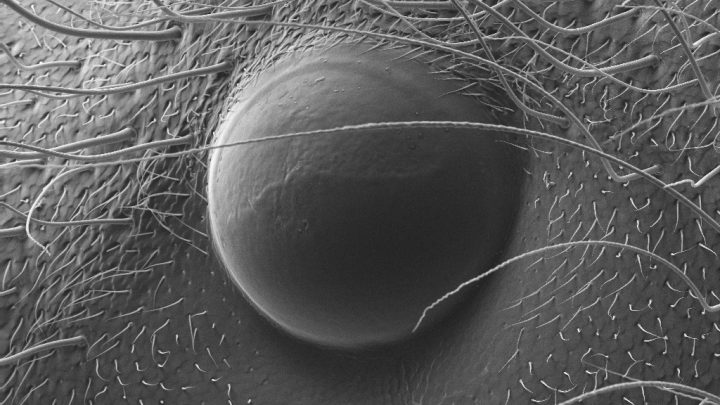 What do you do when you have a fully intact dead insect and you also just happen to have an SEM? That’s a rhetorical question; we both know there’s only one answer.

If you’ve studied entomology (the study of insects), this may not be news to you, but like many of our users, I came from materials science and engineering. It’s safe to assume that we might not know a lot about insect facial features. So, I put one inside an electron microscope; my FIB column was temporarily broken so I had a bit of extra time. This insect was one of many that found its way into the house of one of our other staff members and the insects liked it so much that they decided to nest there. This required the services of pest control. 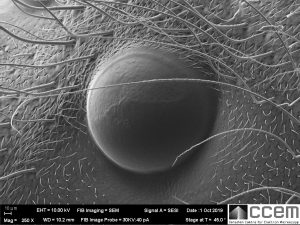 Alright, so what is this? I’ve already given you some major hints. Maybe you think it’s the eye of an insect? 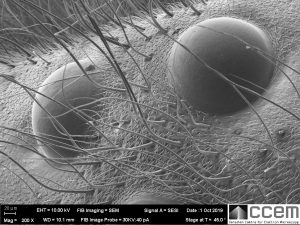 There’s two; that’s a good sign for the eye theory. 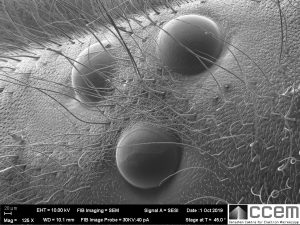 Wait, there’s a 3rd? Uncertainty sets in. Let’s zoom out some more. 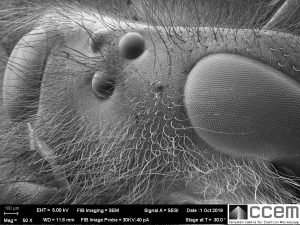 This is a wasp, but you only see part of the head here since it’s far too big for my maximum field of view. (In the electron microscopy world, insects are giants.) Now you can see the large “compound eyes” that you’re probably familiar with since they’re easily visible with your own eyes and likely the most recognizable insect facial feature. 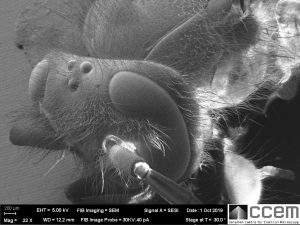 These compound eyes only provide the wasp with low resolution vision. However, since they protrude outward in a dome and curve down the side of the wasp’s head, the shape gives them a very large 3-dimensional field of view, or more mathematically speaking a “high solid angle of detection”. They can also detect fast movement. [1] 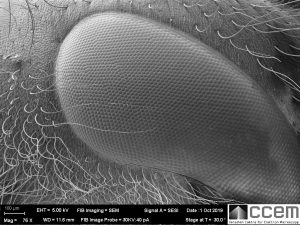 Each domed hexagonal shape is an individual cornea that is transparent to visible light. Under the cornea is a cone lens, photoreceptor cells, and pigment cells to block excess light transmission to other units; all together forming a unit called an ommatidium. The compound eye consists of hundreds to thousands of ommatidia. [2] 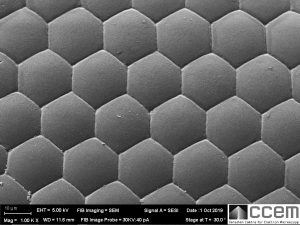 Nature is so perfect with these hexagons, right? 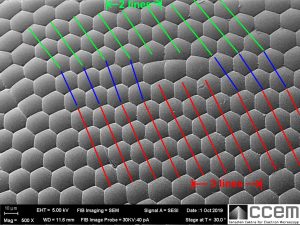 I found edge dislocations in the hexagonal arrangement of the ommatidia, and this is one of them. (Materials science, remember?) You can see by the angles of the blue lines how the hexagonal lattice distorts to accommodate the extra line of ommatidia. The hexagon angles and side lengths close to the dislocation site are also heavily distorted, with a few of them having only 5 sides. These dislocation “defects” weren’t uncommon either; there’s even a second one in the horizontal direction on the left edge of this image. 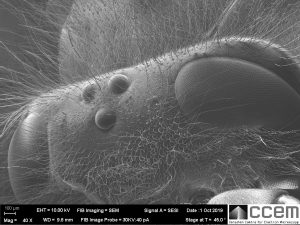 Anyway, back to the 3 domes in between the two compound eyes. So, then what are they?! I couldn’t leave this question burning in my mind for too long, so I tracked down the answer.

The answer: Also eyes!  Wait… what?
They are called dorsal “ocelli”, which is the plural of “ocellus” which means “simple eye”. Apparently, this extra triplet of eyes does not form an image, but they can detect variation in light intensity far more precisely than the compound eyes, and faster too because of their relative biological simplicity. These ocelli seem to be theorized to help with flight stability. Consider the pitch, yaw, and roll rotation axes in flight and how the difference in light intensity detected between each of the three ocelli would be enough to detect changes in all three of those rotational directions, assuming their environment has some directional lighting. 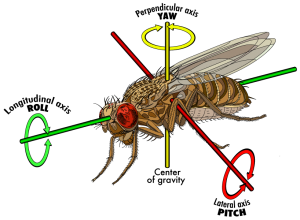 This is more than just a curiosity for science, because understanding the ocellar functions in insects can for example be applied to the engineering of flight stability controls in micro air vehicle drones. [4,5]

A few additional comments for those interested in the sample preparation of insects and some related SEM tips: